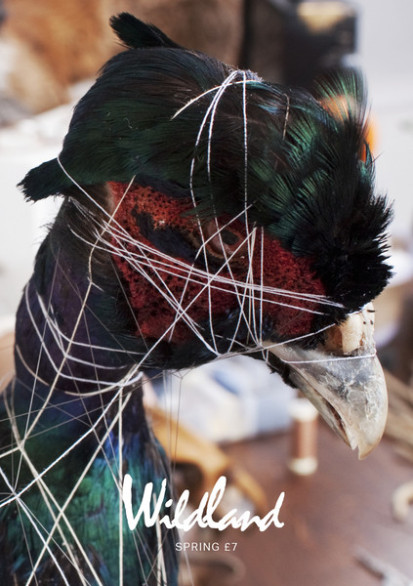 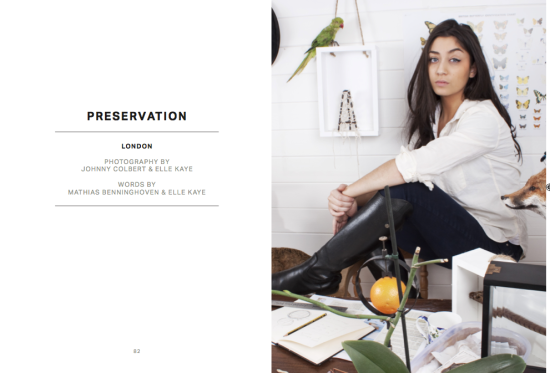 ‘Preservation’ is an article for Wildland Mag’s Issue #03 about the appeal, reputation and future of taxidermy, featuring Elle Kaye, one of the craft’s young masters. Photography by Johnny Colbert & Elle Kaye.

The craft of taxidermy vanished from our households to a great extend in the early 20th century, often stigmatised as archaic, politically incorrect, creepy or simply gruesome and unaesthetic. You’d almost think that nothing has changed since then, but if anything taxidermy has never been hotter, secretly sparking an interior trend for quite a while now. Even though it’s probably still not everyone’s cup of tea, its return into the public eye doesn’t come as a surprise with the revival of other old art techniques like analogue photography, encaustic painting or chromolithography. In the same sense that taxidermy celebrates the aesthetic rebirth of an animal, the ever-changing art world turns its focus back again towards true craftsmanship.

A bright example for this growing squad of young taxidermy advocates and practitioners is UK artist Elle Kaye. For her, the work with animals is a way to combine two passions – anatomy and biology on the one hand and fine art on the other: ‘Taxidermy allows me to deconstruct and reconstruct a specimen, feeding my scientific curiosities, whilst allowing me to refine my craftsmanship and sculpturing abilities.’

Far from its artistic value and aspirations, taxidermy inevitably clings to the stigma of morbidity and brutality in the public mindset. Elle however does not view her work as something disgusting or offensive, but rather advocates that her craft presents the sensitive subject of death and decay in a more accessible way: ‘My ideas come from (…) my desire to project beauty, or my willingness to capture an essence, an emotion, or a moment of transience.’

Another vexed issue, which touches ethical boarders even within the taxidermy community, is the artist’s methods of work and the approach towards death. While the more traditional practice may involve the breeding, hunting and killing of animals, Elle emphasizes her respect for the animal body and the aspect of sustainability behind her work: ‘I don’t waste and I take pride in using road kill. I’ve learnt the value and strength of preservation. I’ll eat all of the carcasses from the animals I skin. I give the bones away to artists or craft jewelers who can use them in their practice.’ Naturally, that doesn’t mean that her idea of practicing taxidermy isn’t incurring any animosities or hatred, such as from PETA supporters or other animal rights activists: ‘I’m not frightened by it, because most of the time the criticism comes from the ill-informed. A lot of people make assumptions before reading up about me, or speaking to me about my ethics. It used to really jade me, but now I use it as motivation to propel me to success.’ It seems safe to say that whichever path taxidermy is tracing, it’s destined to stay this time round.